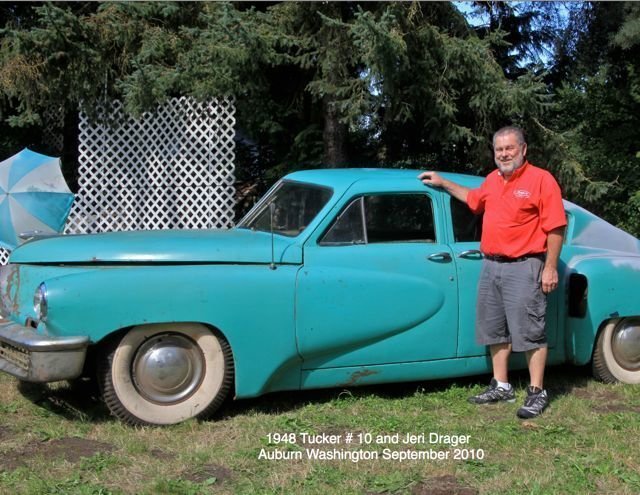 When was the last time you saw one in person This is the “barn find” of the year. The Tucker #1010 has been sitting in the garage for over 40 years. Last Licensed in California in 1965. As you look at the photos you will see front end damage. Seems the Tucker rolled down the driveway through the garage door. This was in California. The Tucker was bought in Aug 1956 in Cal from a Motor Trend ad! Was last driven in 1957, only 603 miles & parked. Now has 9,819 miles. Flat towed to Auburn down the grapevine in California. The Tucker was heavier than the vehicle towing it! Historical data from Alex Tremelis, tucker designer, claims the car #1010, went 134 mph at Bonneville in 1952, also has a special 431 gear ratio. The bumpers were off the car, I do not know why. Maybe to repair the Tucker? It is a very solid car. The mice, as you would think, made a home in the Tucker. It was crusty on the underside. The owner would run off anyone trying to see the Tucker. Harold LaMay, the largest collector car owner in the world, tried to buy it but was not even allowed to see it. I'm not sure how he found out about it. A photo of the rear end made it out, not sure who took the photo. So how did this Tucker come out of hiding? Very interesting story. Now you know the Tucker has been sitting for 40 years and people tried to see it, but the owner would chase them away. The whole family was sworn to secrecy. No one was allowed to talk about it. Brian Pain grew up in Auburn, Washington. When he was a kid he saw it. But again, the owner chased him away. His sister was and still is friends with the owner's daughter. The owner died 2 years ago. Brian made contact with the family. Brian and his friend Gary Savage came out from Colorado and put together the sale of the Tucker. I have to tell you they did a great job for the family and new owner. The new owner wanted the bumpers installed. I think every part was found except the left front turn signal. How did I get involved? The owners accountant wanted an appraisal. Brian and Gary called me to do the appraisal. They prepared the car for shipment. Now this was a family affair, 4 generations were on hand to see the Tucker rolled out. Charlie, the owner of Classic Car Courier, came with his roll back to pick up the Tucker. He took it for shipping to the east coast and the new owner. It will be neat to see it when it's finished. This is one of the fun parts of being in classic cars. Jeri Drager, Drager's International Classic Sales 206-533-9600