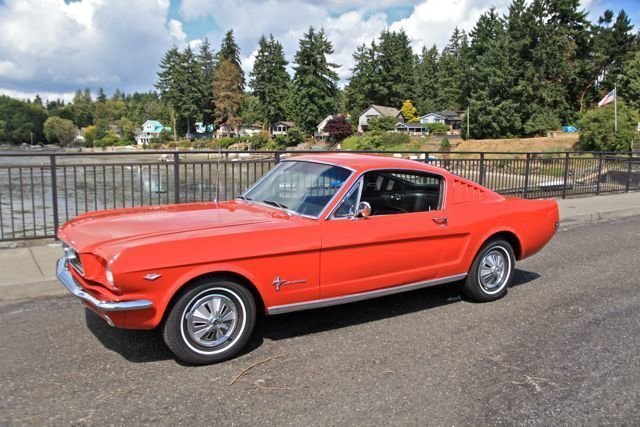 One Fast Fastbak This is a good-looking fastback. It is set up with the 1969 302 Ford V-8 engine That engine was rebuilt. 4 Speed transmission. JBA stainless exhaust headers with all new 3 inch exhaust system. New radiator. Heater system rebuilt. New gas tank. Less than 100 miles since all this was done. The Mustang has been sitting since 1982. At some time it was hit in the front end. I did not see any frame damage and the reason I know that it was hit is because the front inner fenders have been replaced. It looks like it was also hit in the rear end. The reason I known that the backend was hit I can see some repair work at the back of the gas tank. They did a good job repairing it and it looks like it was a long time ago. When they replaced the front inner fenders they had the Washington State Patrol install a Washington Vin tag. The bottoms of both doors have had speakers installed so now they are just open holes. As you would expect with the 302 it runs strong and sounds really good. Old School Garage, when doing this service and safety check, found a crack in the tail shaft of the four-speed. We just happened to have another four speed so Joe swapped out the four-speed. Joe installed strut rod bushings, sway bar, sway bar bushings, sway bar end links, shock absorbers front and rear. He replaced one wheel cylinder and some bad brake lines. To give you an idea of how well Joe works to make sure my cars are in great shape, he drove this car 24 miles. I want to tell you this fastback as horsepower. Joe did a great job. There has been a lot of work done to this Mustang. Things like new dash pad, door panels, carpets. This is not a perfect fastback but it looks good and it drives very well. Its red paint looks good but its not perfect. So far I have driven the Mustang over 70 miles and I like the way it runs and drives and it could be a little smoother but its not stock. I think youll have a great time owning and driving this fastback. Cond. # 3. \r\n\r\n