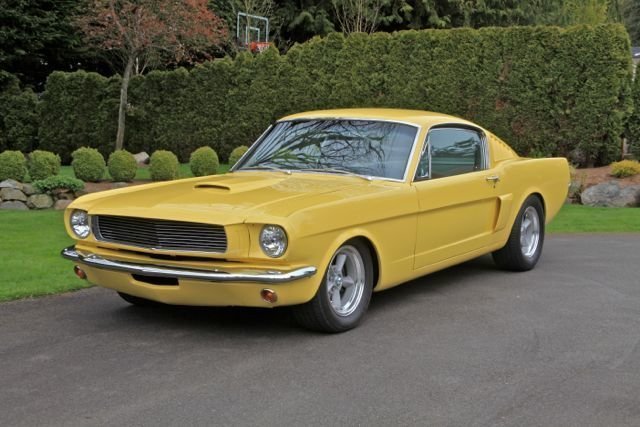 This one nicely reworked Mustang Mustang II front end This is one fantastic Mustang. If you're a purist you don't need to look any further as this Mustang is not stock. Of all the Mustangs I have owned this is by far the neatest and best. I just sold a '65 blue Mustang that was the best until this one. Has 500 miles on a five-year restoration. It was owner built. This man is a craftsman. I also bought an outstanding 1937 Ford Carson top St. rod that he had also built and owned for 28 years. He installed a Mustang II front end with power steering and power disc brakes. The brake master cylinder is a split system. Installing the Mustang II front end meant that he could take out the existing shock towers. So now you have a lot more room in the engine compartment. The engine and engine compartment are show. He lowered the front a little more than he lowered the rear so it has a great looking stance. He installed soundproofing throughout the car. The rear side scoops work, air flows through to the brake drums. This Mustang is kind of a 350 Shelby GT tribute. The wheels are 5 spoke cast and polished wheels. This Mustang was set up to handle. The interior is beautiful. Full custom dash with Stuart Warner gauges. I love the color combinations of the interior. The interior is show too. The whole Mustang is show. To really get a good feel for this Mustang make sure to watch the video, we show you the whole car. Cond # 1-.