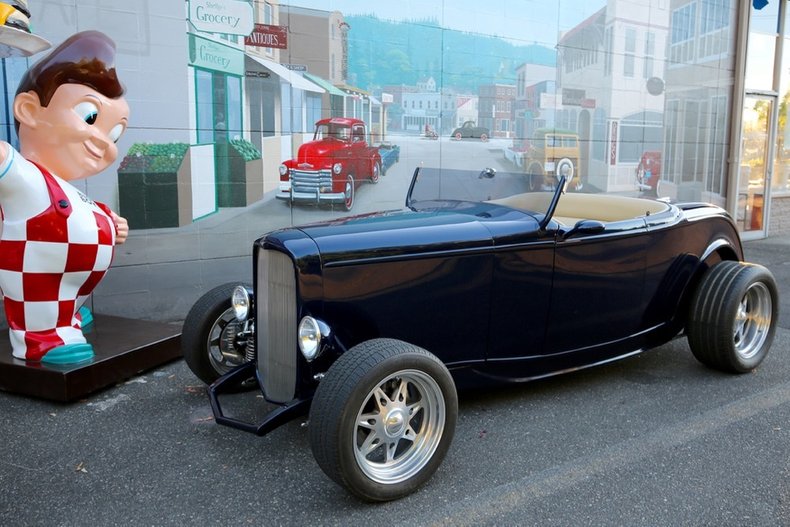 I have known this '32 since it was built. That was way back in 2002. Steve built the car in Sparks, Nv. He sold the car with about 1,000 miles on it at the Silver Auction at Hot August Nights. I was the buyer, but I bought it for my good friend, Gene. It's a sad story as I have had the '32 the whole time and Gene never drove it once in all the years he owned it. Gene died some time ago. At first his daughter did not want to sell the car but changed her mind.  I sold it to Mike 5 years ago. Mike did a lot to it. One of the first things he did was replace the dropped spindles with stock height which it needed. Mike installed a new Flaming River steering system for better turning. Added an Ebrake. New larger 750 cfm Edlebrock for the supercharger to make positive boost pressure.  Mike built a fold down soft top, too. He added seat warmers as the '32 has neither heat nor air. Plus a lot more. Mike likes to work on them more than drive them. So in the 5 years since Mike bought it, he drove it 800 miles for a total of 1,896 miles.  Engine is a Chevy 350 Targetmaster crate engine with supercharger.  Turbo 350 transmission. 9” Ford rear end. 4 wheel power disc brakes.  Custom leather interior. It is nice. You may notice small fenders in some photos and video, but we have taken them off as we did the top, too.  Cond. # 2.