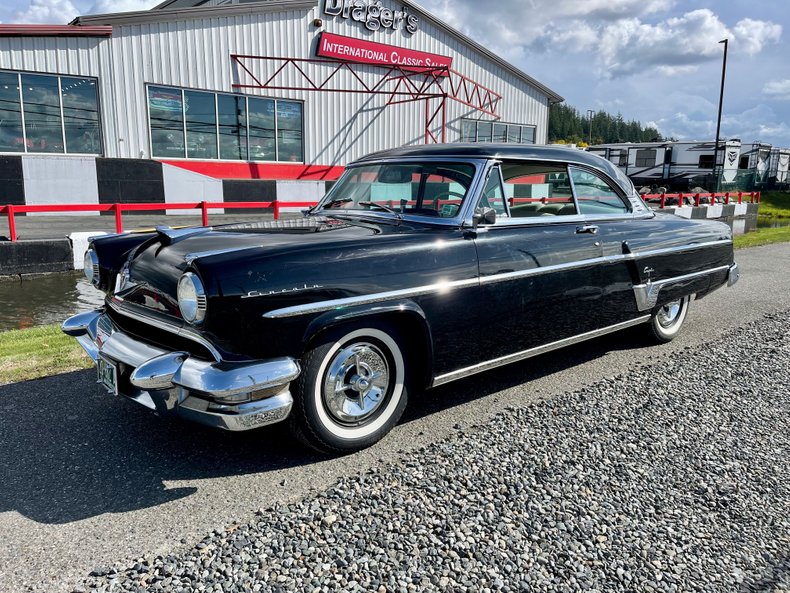 1954 Lincoln Capri 2 Door Hardtop. DGC623H. VIN 54LA8623H This Lincoln Capri is an interesting car with history. I have had a chance to spend time driving this car so I feel I know it very well. We believe that it's an actual mile car. The speedometer now shows 70,045 miles. It is believed to be actual miles and it very well could be. Can I prove it? We have a three ring binder that someone set up and we have registrations from 1964. These registrations show that it lived on San Juan Island from 1954 to 1964. We have no other information. We know that in 1964 a person by the name of Hook owned it until 1981. Nicholas bought it and he left it on San Juan Island until,he moved to Lynnwood, Washington. In 1983 Nicholas moved to North Dakota for a short time and then back to Edmonds, Washington. I don't know when Nicholas died and how soon after that his widow sold the car to DeGrazia. DeGrazia died in about 2012 and his brother inherited the '54 Lincoln. He has owned it till now. So living on San Juan Island all those years makes it very possible that this is an actual mile car. I had our painter, Larry, come and inspect the paint as I felt it was original and Larry felt the same. The car is very straight. There are a couple of very small dents but you have to look for them. The right front fender on the outer edge of the wheel opening has been rubbed so it has scratches that I did not see till I was looking at the photos. The paint has rock chips and blemishes, but I found no rust. The chrome looks original. After driving it 60+ miles it just runs and drives great, very quiet, smooth and comfortable. The interior is original also. As you would expect with a high-end car, you have power steering, power brakes, power windows, and power seats. The radio does not work. But the wipers and heater work fine. I used the heater in the early morning. The trunk has the original mat. The underside has a lot of build up from dust and dirt over the years ( Maybe living on a long gravel road? ) When I saw all that buildup, it made me think this was not a 70,000 mile car. But the more I look at it, I think it is. I can't prove it. The doors close well. The windows operate properly and I think it really looks good with all four windows down.