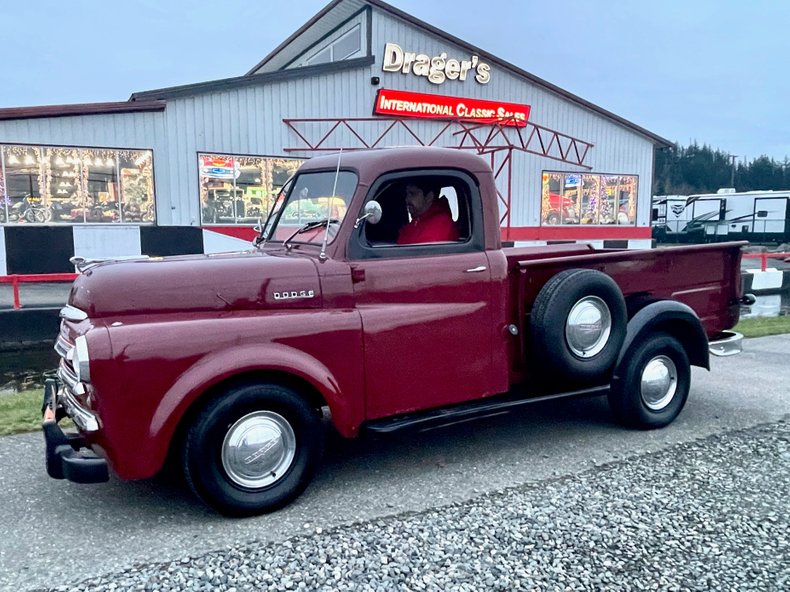 This 1949 Dodge B-1-B DGT5634 VIN TI42 * 75634 Looks like a farm truck to me. It's not been licensed since 2012. This half-ton pickup is powered by a 218ci flathead inline-six, paired with a three-speed manual transmission and is finished in red and black over tan vinyl. The truck features black steel wheels, a side-mounted spare tire, a split windshield, dual taillights, and a wood bed floor. Service carried out since 2017 included replacement of the fuel pump, tires, and wheel cylinders as well as a speedometer rebuild and fuel tank cleaning. The truck was previously blue, and was repainted in its current red with black running boards and rear fenders under previous ownership. Rust is noted in areas such as the door bottoms, cowl, bed, and windshield frame. The taillights were repaired in October 2021. Black 15” steel wheels. 225/75 Hankook Optimo H724 tires that were mounted in 2018. A spare with an older radial tire is affixed to the left bed side. The front drum brake wheel cylinders were replaced in 2020. The cabin features a bench seat trimmed in tan vinyl as well as green residential carpet covering the floor. Equipment includes a glovebox, lap belts, an electric dash fan, an aftermarket turn signal switch, and an inoperable radio. The painted steel dashboard houses temperature, oil pressure, and fuel gauges as well as an ampmeter and an 80-mph speedometer that was rebuilt in 2018 under previous ownership. The five-digit odometer shows 38k miles, though true mileage is unknown. The 218 ci flathead inline-six is fed by a single carburetor that was rebuilt in 2018. An oil change took place in October 2021. The truck is titled on its engine number. After buying it, Andrew and I took it down the freeway and drove 50 MPH just fine. I bought it in Oregon. I'm impressed with its overall condition, remember it's a farm truck.