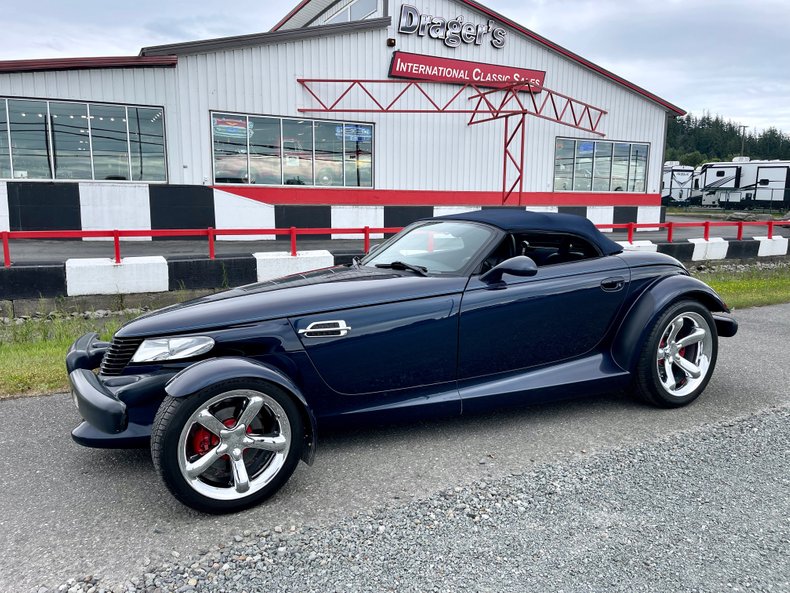 2001 Chrysler Prowler DGC3772 VIN 1C3EW65G81V703772 This 2001 Chrysler Prowler Mulholland Edition two-door roadster is one of 3,142 Prowlers produced for its model year and has been driven 70K miles since new, receiving power from a 3.5-liter V6 paired with a rear-mounted 42LE 4-speed automatic transaxle. It was sold to its original owner in Lees Summit, Missouri in February 2002 and was relocated to the east coast where it has been garage-kept in South Carolina since 2014 under the seller's ownership. Features included staggered-diameter chrome wheels, power convenience options, and four-wheel disc brakes. Finished in Midnight Blue Pearl with a Dark Blue cloth top over a black leather interior. The retro-styled Prowler first debuted in 1997 under the Plymouth brand nameplate as a two-door roadster. Design engineering centered around an open Indy-style front axle configuration and aluminum body construction, with final assembly completed by hand in Detroit, Michigan. When the Plymouth brand was phased out in 2001, the Prowler continued to be sold as a Chrysler for the 2001 and 2002 model years.  Staggered-diameter chrome wheels measure 17 inches in the front and 20 inches at the rear. Those are surrounded by tires that have been driven approximately 5,000 miles. Standard equipment on the Prowler includes four-wheel disc brakes and an independent rear suspension. The two-seat interior is fitted with leather bucket seats, matched to the door panels, center console, dash, and carpeting. Equipment includes rollbar hoops, power windows, power door locks, cruise control, keyless entry, air conditioning, and a radio. Instrumentation is set within a color-keyed bezel at the center of the dashboard and includes a 150-mph speedometer and auxiliary readouts for the fuel level, coolant temperature, oil pressure, and voltage. The digital odometer reads 70,196 miles. The 3.5-liter EGG V6 was rated at 253 horsepower and 255 lb-ft of torque when new. Power is sent to the rear wheels via a rear-mounted, console-shifted 42LE 4-speed automatic transaxle with AutoStick manual gear change capability. Being in the classic car business I always liked the looks of the prowler but I never ever owned one or drove one. I just bought this one because it was a clean well cared for prowler. I was really impressed when we put it on the hoist to take photos of the other side that's when you get to see how well and how interesting this car is. It reminds you of a race car the way it's built just check out the front suspension and how it's all put together looks like a race car to me. This is not a practical car this is strictly a fun driving experience it handles like a sports car. It is tight fitting so if you're big like me it takes a little work getting in and out but I was able to put the top up and get in and out so it's not for everyone. I'm glad I bought it and I'am enjoying it. Isn't that why you buy it is to enjoy it.