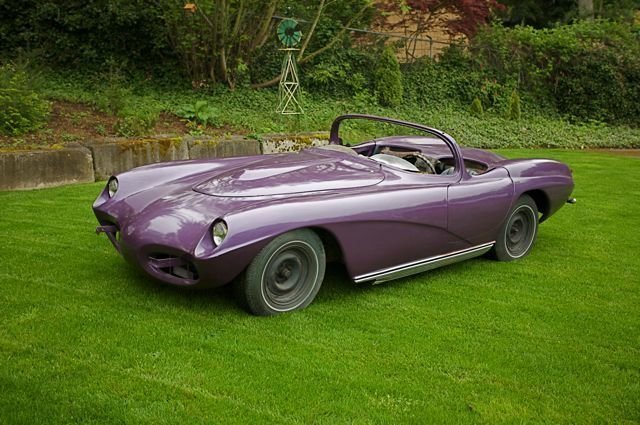 Canadas first fiberglass sports car. I have owned this car for 15 years. I was always going to restore it but that never happened. This car was in Port Angles WA. for years. I had a customer that found it and bought it. He brought it by to show me. Then 3 years later he wanted to trade it in on a truck I had. I liked the Conquest so I now own it. I went through the brakes then never drove it. It sat so long I had to go through the brakes again. Looks to be a 1972 350 Chevy engine with a 4 speed transmission. I want to tell you it runs well. I took it down to the the gas station (today) and I liked the way it drove. It had been a long time since I had driven it. Needs a set of pipes, but does not make much noise. Im not sure why we are selling it, but my son Andrew put it on ebay. I may regret selling it but I will never restore it either. Everyone that sees it thinks its a Corvette that was modified. So what is it? Keep reading...\r\n The LaDawri Conquest was designed and built by Les A. Dawes of British Columbia, Canada and is recognized as Canadas first fiberglass sports car.\r\n The Conquest was first shown at the Pacific International Exhibition at Vancouver Canada in 1956 as the Cavalier. Original plans were to create a complete sports car for sale and distribution throughout the United States and Canada. The body itself is fiberglass and was designed to take a wheelbase of 100 to 104 inches and a tread of 56 to 58 inches. This covered Corvettes, Thunderbirds, and the like of the day. However, within a year, the car, family, and company moved to Long Beach California where production began and the car debuted on the front cover of Road and Track in July 1957. From this point forward, the car was known as the Conquest. LaDawri continued with car production producing both cars and kits from 1957 through 1965 when operations ceased. \r\n ( This is info I found on the web about La Dawri ) 1960 La Dawri of Los Angeles Conquest. This is a rare kit car. I havent been able to find the exact number produced, but it has to be a small number because I have never seen another. There are a few around as there are several websites dedicated to them or other early fiberglass cars. This car runs and drives, but needs to have the windshield and front bumper installed to make it street legal. We recently went through the brakes, so they are fresh and working properly. We also just had the carburetor rebuilt. With this vehicle, you could paint it, throw some fancy wheels on it and you would have a very unique car. Or you could go the other route and restore the entire car. My father bought this car in 1993 and had big dreams of restoring it. We ended up putting the car is storage until about a year ago. I think that he still thinks about restoring it, because it is such an unusual car. On the other hand he seems to be ready to sell the car. # 4 - Cond.