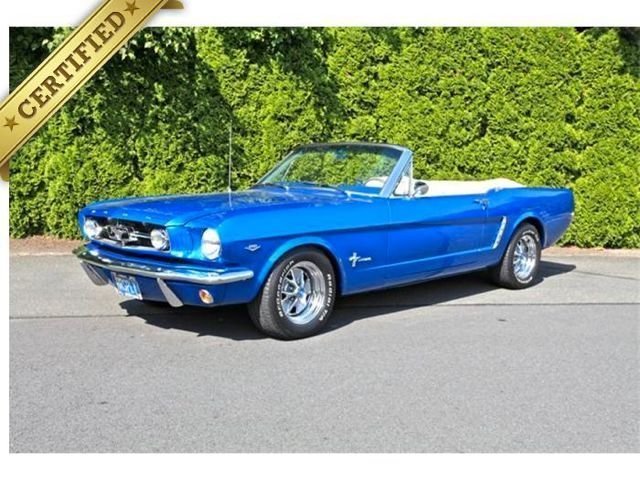 This is one Stunning Mustang Maybe the Best You will find. Certified Classic Vehicle___This vehicle has been visually and mechanically inspected by an independent ASE-certified technician and passes the criteria required to provide the buyer with the coverages listed on the certificate. Coverages take effect on the day of ownership transfer. \r\n \r\nThis has to be the best Mustang I have ever owned. I have been buying and selling Mustangs for over 30 years and I have never had one in the condition that this Mustang is in. I have had some very, very nice Mustangs. I bought this car out of Bend, Oregon. They had owned it for over 15 years. It was an Oregon car when they bought it. It was a very good rust free car at that time. They restored the car and you get a photo album of the restoration. The Mustang was stripped to bare metal and repainted. It is an incredible paint job, in the most stunning blue you would ever want. The engine was rebuilt. It now has about 5,000 miles on the rebuild. C 4 transmission was rebuilt with a shift kit. The engine compartment is beautiful. The polished finned valve covers and extra chrome set it off. Power steering. Manual disc brakes on the front. Chrome style steel wheels. What she did in the interior was remarkable. She bought all of the white vinyl interior in one piece so that all of the interior would match. She then made the deluxe pony interior with the ponies embroidered in blue. This was not a pony interior to start with. They installed an air conditioning unit under the dash but did not install the rest of the air-conditioning. We have it in the box and it goes with the car. The dash is painted to match the interior white. The console, and dash are painted to match the white vinyl interior. The dash pad matches the beautiful blue exterior along with the doors. They installed a custom speedometer panel that you can change the colors. The rally pack was brand-new and we hooked it up so it is now working. She installed custom lighted door sills. It has the wood grain steering wheel. Has a custom radio with that 10 CD player. Two speakers installed in the side kick panels. The power top is white with a glass rear window. The trunk is clean and nice. The underside is incredible. I was told it was a no rust car when they bought it and after going over the Mustang I believe them. I could not find any indication of any rust repair. The original spot welds at the bottom of the rockers are there just like they came from the factory. You do not see that very often. How nice is this Mustang? The Mustang judges thought it was outstanding. In 2005 the Mustang club of America judged the Mustang and 5 points were deducted. 1 point for not having a window decal, 3 points for a little dirt on the engine and 1 point for a little overspray around the VIN number. If you want to see the judges sheets, check out the photos. Make sure you watch the video. I go over the Mustang very thoroughly and you can see it run and drive down the freeway. You will like this Mustang. Why did she sell it to me they were moving to Hawaii then they did not want to see the Mustang deteriorate. Most would judge this Mustang a number 1. To me a number 1 is a total trailer queen, and I know you will want to drive this car just like I have. Condition # 2++++.\r\n