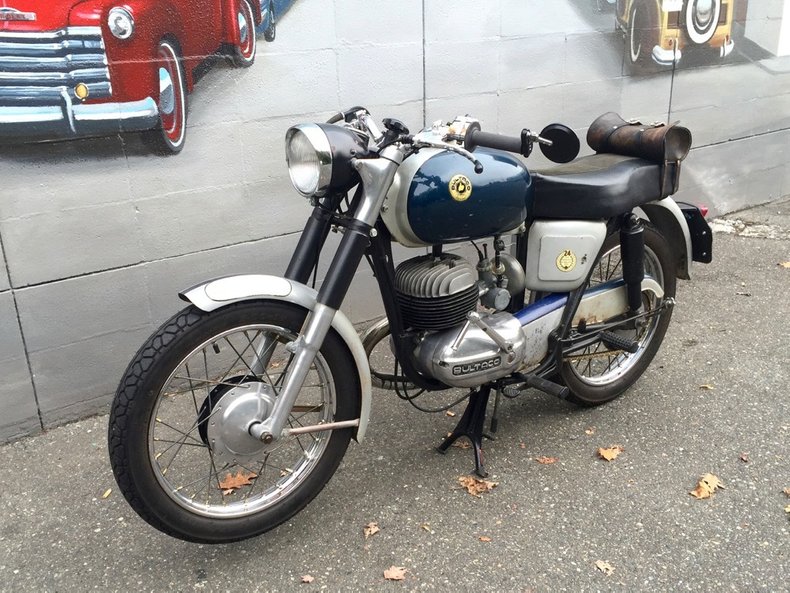 Make sure you go below the discrption to see 58 photos
1966 Bultaco Mercurio 175cc.     # M921218.   This is an all original Bultaco with a very interesting history.  It was mechanically restored, like new tires and the gas tank was cleaned so it is very rideable. Already won #1 in Class at the 2014 LeMay Museum Vintage Bike Festival in Tacoma Wa.  ,

From the last owner;

There's a nice story associated with this motorcycle, that I'd like to share. My father bought the Bultaco in 1975, and tinkered with it and rode it around Edmonds where he lived. Then in 1977 a move to California made him decide to sell it. I worked in a local bike shop and knew a sales rep that owned several unique bikes. I sent him to my Dad and he bought the bike. For the next decade whenever I'd see Keith I'd inquire about the Bultaco, and he'd smile and say the same thing- “I haven't ridden it much, but it's snug as a bug in my garage.”  As life goes, we'd talk every few years, but I just assumed he'd sold it long ago, especially after he moved to Arizona. Then in 2012 he came to town and we had a chance for a catch up visit. Much to my amazement he still owned the Bultaco! He was clearing out his garage, and he wondered if I'd like to buy it. So the little bike came home. But I'm afraid I have to part with it, so I hope it finds a home in someone's garage that will enjoy it.
This Bultaco has been locally owned since the 1960's.  It was fully restored mechanically in 2014 by Dale Franklin and Paul Perolli.  A few of the restored features include:

This does not happen very often. Also a side note, when Kevin checked out the bike (when he was buying it) he opened the tool door and found the oil measuring cup and it still had his dad's written note on it. Just tells you this is an unmolested motorcycle. Great starter vintage bike and it has won a trophy.
1966 Bultaco Mercurio 175cc.   Cond.  # 2.
.


We charge a $50.00 doc fee for instate and $100.00 doc fee for out of state sales on top of the selling price. The State of Washington says we can charge up to $150.00 doc fee that is negotiable. The doc fees cover costs such as trip permits and FedEx costs.