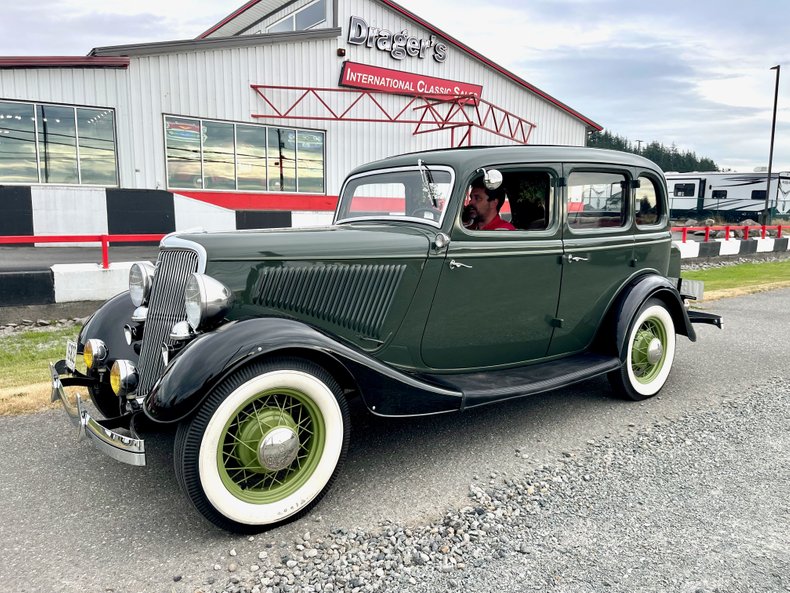 1934 Ford 4 Door Sedan DGC1509 VIN 18911509 this is a beautiful 1934 Ford I knew I wanted to buy it as soon as I saw it. It looks totally stock but it has some upgrades to make it even better. Had the same owner for the last 35 years. Over the years they drove it to Eastern Washington and Western Washington also into Oregon so they have taken some trips with it. They like driving in on country roads the best. It has been upgraded with a 1951 mercury flathead engine. Three speed manual transmission floor shift. It has the ashtray radio and I got some sound out of it but no actual station but I did not play with it a whole lot I just like the fact that it didn't make sound. Also it has clock in the rearview mirror and I wound it up and it works does it keep time I know it runs but I didn't check to see how accurate it was. Also it has hydraulic brakes. It has fog lights Cowell likes dual horns. I really like 1934 boards but I just sell them see the four-door I've had them but maybe only one or two over the years. It has what they call the potter trunk I've never seen one before. Most of these have been made in the street rods so it's really nice to find such a nice car as this. In 2014 it got a new paint job and it's beautiful today. Of course the white whites set it off. I've only had a chance to drive it a short distance so far and it runs drives and stops very well we need to take it in and get it serviced and safety checked before we deliver it